Sorry! You missed Friends - The Musical Parody at Plaza Theatre

You can catch Friends - The Musical Parody at The D Hotel in Las Vegas, showing Until Jun 30, 2020

Friends - The Musical Parody is also touring to: 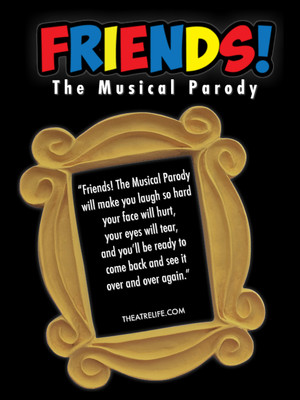 FRIENDS! THE MUSICAL PARODY is an entertaining trip down memory lane.

Why See Friends - The Musical Parody?

Calling all fans of the 90s and early 2000s pop culture phenomenon that was cult sitcom Friends! The smash hit Off-Broadway musical spoof is bringing the lives, loves and messy-inbetweens of our favorite New York-dwelling twenty-somethings back to the stage during a hotly anticipated national tour.

Friends! The Musical Parody transports audiences back to the show's most iconic moments, from Ross' Unagi martial arts mishap to Phoebe's, shall we say, interesting rendition of Smelly Cat to the will-they-won't-they drama between Rachel and Ross. Telling their beloved tales through hilariously self-aware spoof songs like 'The Ballad Of Fat Monica', '495 Grove Street - How Can We Afford This Place' and 'Oh. My. God. It's Janice!', an able-bodied cast sings and dances their way through a fast-paced trip down memory lane that'll have you shouting "PIVOT!' all the way home!

Half of these reviews are of the North American Tour which has NOTHING... more

Anonymous: “So fun to watch!”

On being Rachel, Sami nailed it! The cast delivered! They are so funny!... more

Sound good to you? Share this page on social media and let your friends know about Friends - The Musical Parody at Plaza Theatre.